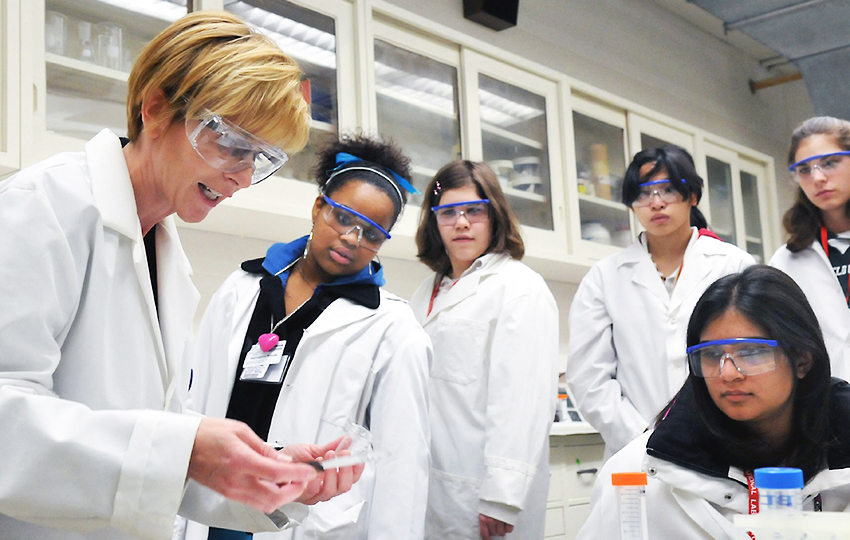 February 11th: International Day of Women and Girls in Science

“We are determined to encourage a new generation of women and girl scientists, to tackle to major challenges of our time. Heeding the call of Greta Thunberg, young women scientists are already making a difference in the fight against climate change, including South-African teenager Kiara Nirghin whose inventions minimize the impact of droughts.
By harnessing the creativity and innovation of all women and girls in science, and properly investing in inclusive STEM education, research and development, and STI ecosystems, we have an unprecedented opportunity to leverage the potential of the Fourth Industrial Revolution to benefit society.”

—  Joint-Message from Audrey Azoulay, Director-General of UNESCO and Ms. Phumzile Mlambo-Ngcuka, Executive Director of UN Women on the occasion of the International Day for Women and Girls in Science 2019

It was on December 22nd, 2015 when the General Assembly decided to establish the annual International Day for Women and Girls in Science. This day recognizes the critical role that women and girls play when it comes to science and technology.

The celebrations for this day are held by UNESCO and UN-WOMEN. They are also supported by collaborations between institutions and civil society partners aiming at promoting women and girls in the world of science. February 11th is the right day to celebrate the promotion of full and equal access of women into science and their opportunity to prove how crucial their role can be.

To tackle some of Europe’s most prominent challenges such as improving health or even combat climate change, stakeholders will need to harness all talent. In other words, there is a growing need for more women to enter and keep entering the science and technology field, now with a much more focused purpose.

It is a fact that over the past 15 years, the global community has made a lot of effort in order to actively include women in science and technology. Unfortunately, even after all these years, women are still not completely accepted as active, crucial members of the field and are rather often purposely excluded from it.

Hence, gender equality plays the most important role for proper and fast development. Right now, less than 30% of the research on a global level are women. In particular and according to UNESCO data for the years 2014-2016 only 30 percent of all the female students selected STEM-related fields in higher education. On a global scale, in ICT a very small percent of female students are enrolling in higher education institutes connected to the field. The number is close to only 3%. In the fields of mathematics, natural sciences and statistics only 5% of women are applying to join. First come engineering, manufacturing, and construction with the number reaching only 8%.

To this day we can safely say that it is long-standing biases and gender stereotypes that are keeping young girls and women away from science and technology and all related fields. That bitter truth is reflected in many different ways. For example, the Gender Bias Without Borders study that was conducted in 2015 by the Geena Davis Institute on Gender in Media proved that out of all the on-screen female characters only 12% of them are linked to STEM jobs and appear to have a career in science.

Taking all of that into account, it is easy to spot the major problem that is the lack of gender equality on the field of science and technology, and the need to promote women in science. By adopting the resolution A/RES/70/212 and declaring February 11th as the International Day for Women and Girls in Science, the United Nations General Assembly is aiming to promote and campaign full and equal access to women for participation in the scientific fields. The Assembly also aims at achieving gender equality and the empowerment of girls and women in all field of labor and every part of their lives!

Innovative approaches to urban and regional development through cultural tourism