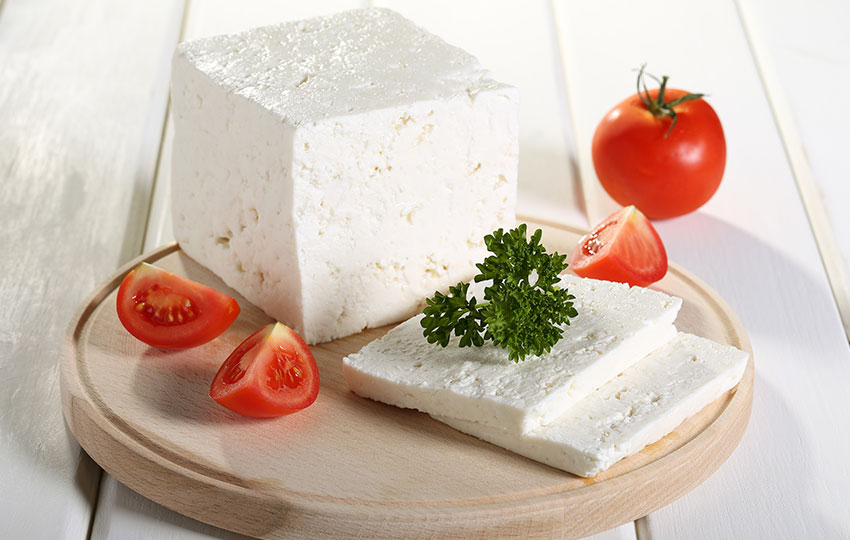 The Feta Cheese is considered to be one of the most famous cheeses across the globe. A traditional Greek cheese that is able to give extra taste to all kinds of foods and a real delicacy when combined with wine

The first reference, regarding the cheese production, is detected in the scripts of Odyssey. At the age of 8 B.C., Homer describes the scene that Odysseus and his companions entered the cave of Polyphemus. Polyphemus was carrying the milk that he collected from his sheep in lambskins, and one day the milk had curled and had taken a solid form. This was considered to be the first report regarding dairy production.

Feta is a protected designation of origin (PDO) soft white cheese ripened in brine and can be manufactured from ewes’ milk or a mixture of ewes’ and goats’ milk (up to 30%). The milk coagulation has to occur within 2 days from its collection. Traditionally feta used to be made with unpasteurized milk, but nowadays industrial diaries pasteurize the milk and they use commercial lactic acid cultures.

Starters, such as Lactococcus lactis and Lactobacillus bulgaricus are used in a ratio of 1:3, in order to produce Feta cheese. The milk is pasteurized at a minimum of 72 C for 15 seconds or any equivalent time-temperature combination. After pasteurization, lactic acid starter cultures and calcium chloride are added, as the milk is being held at 34-36 C. during the next step the milk is renneted at 32 C and coagulation takes place in about 40-45 min. The resulting curd is cut in small cubes, and it is transferred into molds, in

order to drain and shape the small pieces. The filled molds are stored at 16-18 C for 18 up to 24 hours and turned every 8 hours to ensure even drainage. The next day, the produced cheese is taken from the molds and placed temporarily either in wooden barrels or metal containers, where salt is added in layers. The final concentration of salt in the mass of cheese is roughly 3%. The next stage is to mature the salted cheese for 14 – 20 days in brine, at 16-18 oC in order to obtain humidity less than 56% and pH 4.4 – 4.6. The second phase of maturation takes place when feta cheese is kept refrigerated in its brine, at 1-4 oC, for two months (Panagou, Nychas, & Sofos, 2012).

You can learn more about the production of traditional cheeses in the website of the EU project, Ifcheese! You can also take a look at some of the work that the project managers have done with the help of local producers for the dissemination of the cheese production practice!!!

Current situation of blue/pink workers in Greece and in Europe

Volunteering in Europe. What are some skills necessary for volunteering?