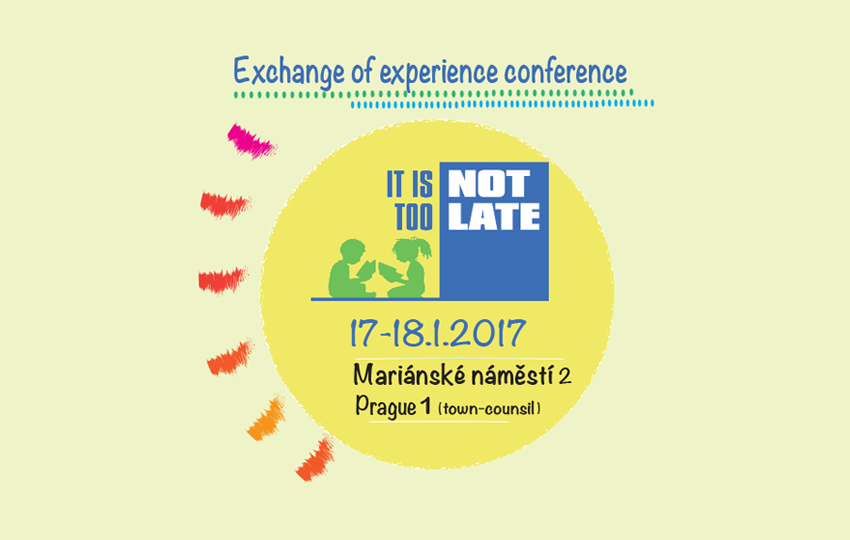 Conference and the awareness campaign” It is not too late!”

In the framework of the PAL European project (cofounded by the Rights, Equality and Citizenship Programme of the European Union), on 17 and 18 January 2017 the Conference of Awareness Raising Campaign It is not too late will be held in Prague (Czech Republic). The Conference will be an opportunity for exchanging experiences and best practices among project partners and professionals who are active in the field of education and school inclusion of Roma people.

The Conference, main event of the Campaign, will be a common space, at European level, where to share the most important experiences in the field of preventing Roma children early school leaving, discrimination in schools and to exchange information about the benefits of education and late-school options.

During the Conference the following topics will be discussed during workshops, short meetings involving external experts and the target group, operators in the sector. In detail: conference about the need for Roma-integration in education, best practices, methodologies and possible solutions; the importance of official recognition of anti-Gypsyism; Root causes of Roma marginalization; promoting the human rights perspective and equal citizenship for Roma; various forms of discrimination and anti-Gypsyism; importance of sensitising the mainstream population; the role of the media in fighting the stereotypes and prejudices about Roma; Roma Youth; enforcement and antidiscrimination legislation, independence of equality bodies from political parties and access to justice.

Best practices recognized by project partners will be presented and discussed.

Alternative paths to motivate and engage youth back to work

Successful implementation of “It is not too late Awareness Raising Campaign” 30 May, 2017