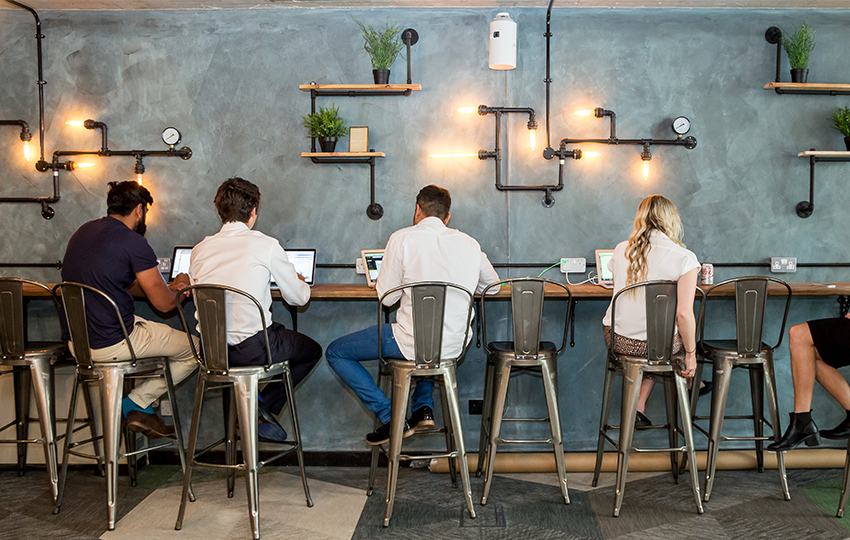 Coworking network in the Mediterranean: From communities to territories

In the last few years, there has been a growing number of so-called “coworking” places in the world and in particular in Europe. While the first “coworking space” was invented in the United States, half of these spaces are now located in Europe. The emergence of these new workplaces corresponds to a certain need, given the growth of freelancers and teleworking practices. However, and beyond a transformation of the world of work, with less salaried employees and less localized businesses, they also show another management, an alternative production, territory and governance management model; a new economic and democratic model.

That is the context of the European project “CoWorkMED – Social Innovation Research on Coworking Clusters” led by the Agency for Sustainable Mediterranean Cities and Territories (AVITEM). This project, which is co-financed by the Interreg MED programme, involves French, Greek, Italian, Croatian and Spanish partners. It aims at providing an inventory of coworking spaces in these five partner countries and at creating tools adapted to cross-border networking between these third places.

A first study carried out in the framework of this project enables us to question the emergence of these new ways of working and social construction methods. What do these new places tell us about the transformations of our professional, social and political world? What are they witnessing? How can we turn them into springboards for territorial development?

The very first coworking spaces, which started out in 2006 in the United States and very quickly appeared in the rest of the world, are directly the result of the development of knowledge-based and digital economy. They have been created for freelancers who want to share a workplace in a community of needs, constraints and values, as well as through the will to create an active network in order to trigger professional opportunities. The first principle of coworking is therefore a place and a community, a network of shared skills and assets, often animated by social events whose aim is forging links between coworkers on both the social and professional aspect. It is a direct emanation of the concept of third places, between private and public place, home and work, with an informal meeting place which creates opportunities nevertheless.

Over the following decade, the concept spread to other sectors, which resulted in the creation of collaborative production sites, in particular in innovation and research sectors, especially with fablabs. Then the social, cultural and public service sectors have also seized them, producing shared spaces adapted to their own problems, with a desire of involving stakeholders and users to develop services most adapted to the needs through co-construction logic. Fifteen years later, there is a strong and direct impact on the territories.

The territory of coworking

Following the logic of pollination, acceleration, incubation and other processes of transformation of ideas involving a community, these places have become true hubs of local innovation. Bringing together a diversity of actors in a voluntary and spontaneous way, they are epicenters of creativity at the scale of a territory, a city or a city center. Thus, they frictionally activate the local economic dynamics and embed them with the special features of a territory, creating a genuine regenerative ecosystem for the territory.

In addition to the direct effects of economic growth, coworking spaces also have indirect impacts on land management. For example, users of these places place an emphasis on proximity between living places and work, they influence mobility and transport. The emergence of these third places thus acts against urban congestion, reduces commuting and decreases the environmental and economic costs linked to transport.

These meeting and interaction points between professionals and users also contribute to restoring the wealth of a territory in its geographical coherence. By creating a concrete and driving network between the inhabitants, citizens, users, workers, who are concerned by the same issues, especially local ones, they value the territory as an integral capital, converging its strengths towards common objectives.

Communities and large groups have also seen the benefits of this new way of working. Their original motivation is to revitalize city centers, by creating local services on this model as a tool to re-animate the inhabitants in their territory, to reactivate local resources, to rehabilitate old or abandoned places, to create local and small mobilities, in short to recreate a local ecosystem. Workers organize themselves increasingly in teleworking (working from home), as they can use these places to save transport time, and thus gain in energy, well-being and therefore in productivity. This is how a new vision of governance emerges, inspired by this movement.

The governance of coworking

These third places were designed as spaces for sharing knowledge and collective dynamics. They bear values of sustainable development, including in terms of management and governance. Through the development of teleworking, big companies improved their employees’ working and living conditions, giving them more autonomy and making them more creative and productive. Small entrepreneurs appropriate their territory and boost it through territorial projects. Communities are inspired by this new trend to revitalize declining territories in front of global, national and metropolitan dynamics through the impulse of third places in the social and public service sectors.

Groups and stakeholders that were so far less porous are creating links. Indeed, from the first “coworking spaces” where professionals from various sectors formed “opportunistic” partnerships (optimizing the opportunities offered by the circumstances) to the new forms of innovative, social and cultural third places, real public-private-citizens partnerships are being formed. Through more or less informal places which help people meet each other, civil society and democracy reinvent themselves in these hybrid places.

After 18 months of implementation, the “CoWorkMED – Social Innovation Research on Coworking Clusters” project will provide a global vision of these networks in the partner territories (France, Italy, Spain, Greece and Croatia) to promote their institutional recognition and their transnational structuring as a lever of innovation in the Mediterranean. Through the study of new models, it will provide the basis for the creation of a Mediterranean coworking network.

Preparation of the development of a Digital Literacy Module for migrants, refugees and asylum seekers